September 5th 2022, Dale Keith McRaven at the age of 83.5 transcended peacefully at his Porter Ranch, California home, comfortable in his bed, as his wishes, with his loving family, nurse, and pet dog, The Mighty Kong, by his side. 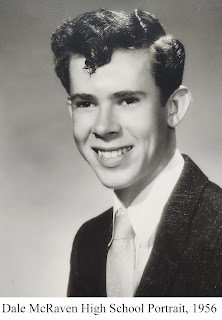 Born on March 5th, 1939 on a farm in Southern Illinois near the town of Pulaski, Dale was the 5th of 6 children from Raymond and Ella McRaven. As a small kid, Dale recognized that bullies seldom hit you when you made them laugh, hence a great self-defense tool and the skill that launched an incredible life. 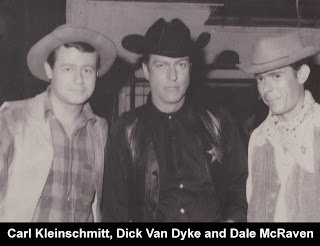 Dale McRaven is an accomplished comedian, magician, performer, TV writer, producer, creator, photographer, artist, father, grandfather, uncle, and mentor who is loving and humble. His First real job in show business was in 1963 at age 24 on the “The Joey Bishop Show.” He was hired by Garry Marshall who found Dale and Carl Kleinschmidt, as his partner, to be the staff writers for a year and a half. Another break for Dale was at the Desilu Studios owned by T and L Productions, who were Danny Thomas and Sheldon Leonard. One day on the street in the studio lot, Leonard grabbed Dale and Carl and said "I want you boys to follow me because I am going to change your lives." He introduced them to Carl Reiner who wanted them to write for “The Dick Van Dyke Show.” The show won a Writer's Guild Award for their first script and earned them 8 more scripts out of 28 shows in the final season of “The Dick Van Dyke Show.” Dale and Carl’s writing also won an Emmy Award Certificate because that year no trophy was given for “The Dick Van Dyke Show” chosen for the Outstanding Comedy Series of 1965-1966. Together, Dale and Carl continued writing pilots and scripts for “The Odd Couple,” “Gomer Pyle,” “Bill Dana,” “Hey Landlord,” and other hit shows at the time. 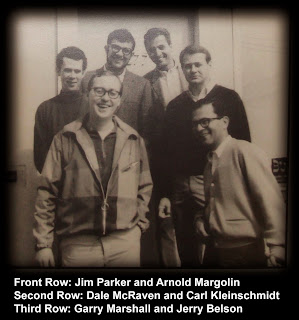 Dale and Carl shared an office on Sunset Boulevard with 2 other writing teams since “The Joey Bishop Show.” Garry Marshall and Jerry Belson worked together and later on, Jim Parker and Arnold Margolin joined them. The 6 writers had a bond that carried them through to write many other amazing shows. Every 5 years when Gary Marshall was alive, the writers had a tradition to meet for lunch then go take a picture in front of their old Sunset office. 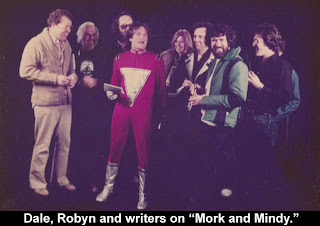 Dale McRaven also had a gift and ability as a Star Maker. Hollywood Stars such as Robyn Williams, Pam Dawber, Mark Hamil, Garey Busey, Bronson Pinchot, Mark Lin-Baker, David Cassidy, Susan Dey, Danny Bonaduce, and many other actors had Dale as their guide at one time of their career. Under his guidance, he also lifted writers, directors, producers, photographers, artists and anyone who had the grace to work by his side. 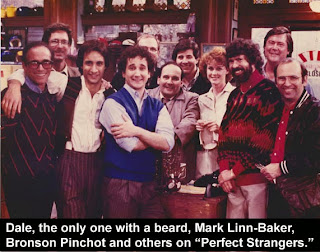 Dale went on to produce the hit TV sitcom “The Partridge Family” and sold his first created show, “Texas Wheelers,” to ABC in 1974.Other shows he created are “The Betty White Show” in 1978, “Angie” in 1979, the “Mork and Mindy” show airing 1978 to 1982, winning a Writer's Guild Award Nomination in 1978, then a People's Choice Award in 1979. Dale K. McRaven was inducted into the Who’s Who in America, forty-first edition, 1980/1981, for individuals with outstanding achievement contributing significantly to the betterment of contemporary society. Dale’s final show in 1986 was “Perfect Strangers” which also became a hit TV sitcom. Dale was a writer for “Three on a Date,” “Almost Heaven,” a “Happy Days” segment, movie scripts, a book, pilots and other creative writings. 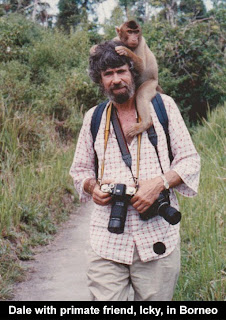 Always a lover of nature and animals, with his camera, Dale caught amazing moments in life. He traveled whenever there was a storm, most of the time driving alone on any back road he found or sometimes exploring with other photographers. Dale photographed wildlife and weather in America's South West, and most National Parks throughout the world in Africa, Bali, Indonesia, South Pole, and many other places. He always searched for what he called “the killer shot” which were always breath taking dramatic photos of nature, animal, portraits, and abstracts. Dale won two awards of merit for the Los Angeles Zoo’s Eight Annual Photography contest in 1993. 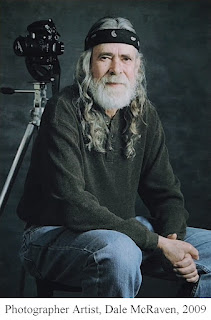 Dale's creative touch naturally continued as he started taking his photos to the computer and digital art programs. He created an extensive collection of digital art series titled “Gallery,” “Heavy Metal,” “Fall,” “Pairs,” “Nudes Wearing Masks,” “Stripes,” “Bars,” “Dream Girls,” “The Secret Life of Flowers,” “South West” along with many more including a 3D anaglyph series where he took Art pieces from his landscape and flowers series to add perceived depth to the layers. 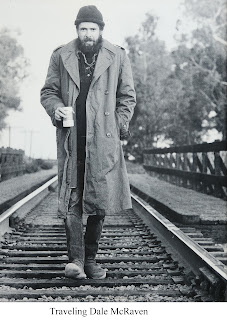 Dale McRaven's amazing creative life is a joy because he is the coolest, down to earth, most modest giving and loving person. Not to mention, he made the best ground beef and vegetarian bean Chili. It is easy to be inspired and in awe of Dale and his accomplishments, from his modest, humble, funny, loving personality, to his writings, TV Producer career, amazing photography, wonderful Art, and his triumphs over the hurdles of his health and challenges in life. Dale will be forever loved and cherished. Surviving members are his son, David McRaven and daughter-in-law, Ruth McRaven, daughter, Renee McRaven, GrissyG Lizárraga and her husband, Dismas Lizárraga, adoring nieces and nephews, affectionate friends and family, Dale’s grandchildren, Justin Davis, Matthew McRaven and Nefertina Lizárraga along with his loving pet yorkie dog, The Mighty Kong. Written by: GrissyG and Dismas Lizarraga GrisDismation.biz
Posted by GrisDismation at 4:00 PM No comments: 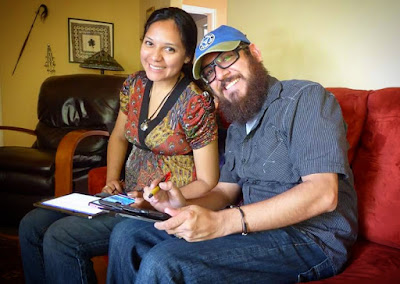 GrissyG and Dismas from GrisDismation storyboarding for "Pooling" a film by Dawn Westlake.

Some years ago, GrisDismation/GrissyG and Dismas had the good opportunity to work on storyboards alongside Director/Producer, Dawn Westlake for her next film titled "Pooling." Fast forward to now 2018, GrisDismation, GrissyG and Dismas,  are animating the beginning and ending sequence to Dawn Westlake's new hybrid live-action/animated breakdance film starring Marcitus, produced by Ron De Cana Productions, Inc. with Imatge Barcelona and music by Joan Armand Forero. Keep an eye out for more on "Pooling."

An animation sketch frame of a butterfly 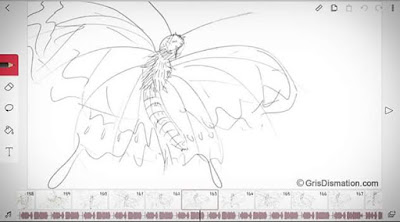 A sketch frame from the short animation about a foolish moth who falls in love with a butterfly. Animation by Dismas.

This was an entry to a FlipaClip animation android application contest. It was animated at 12 frames per second in a hand drawn frame by frame animation technique. Frame by frame means that for every movement a character makes, a separate drawing is needed. This is my preferred method of animating because I feel it's more labor intensive and really helps me develop my drawing skills. I mean after the first second of... lets say 24 drawing of one character, you're sure to be able to draw that character with your eyes closed.  Although frame by frame animating is my favorite style to work in, I do enjoy the process of animating in other ways like stop motion, digital 2D puppet, and experimental.

I am an artist, animator, and author and together with my wife we have an indie studio called GrisDismation and we produce original art and animation. Along with original animated content we also help others develop their ideas into animation. Need an animated commercial, need a storyboard for your indie film, have an idea for a web series? Contact us to find out how we can help you get your animated project off the ground. We have over 13 years professional art and animation production experience and have worked with both indie and TV producers.

Posted by GrisDismation at 12:10 PM No comments:

An animation frame of a butterfly. 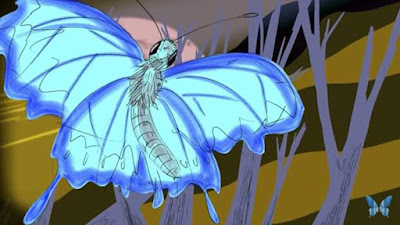 An animation frame from a short about a foolish moth who falls in love with a butterfly.  "Foolish Moth" animation, is an entry for the FlipaClip app Tell Her I Love Her band Unravel Music Video Animation Contest.

This was animated frame by frame digitally hand drawn at 12 frames per second to make for smooth almost slowmotion effect from the butterfly, moth, and tongue strike of the hungry chameleon. I used the slow motion effect to accentuate the movements these amazing insects utilize to gracefully become air born. I also carefully observed and used as reference several slowmotion videos from you tube, ya know, to give it a natural insect flight.

My name is Dismas and I am an artist, animator, and author. With my wife GrissyG, we work as GrisDismation to produce original art and animation. Animation or what some refer to as cartoons are a visual art medium used for entertainment, promotion, games and more. If you have an idea, commercial or short film that needs to be brought to life in an animation, GrisDismation can help you develop your vision from concept to completion with a unique art style to make it stand out and have lasting appeal.

Want us to help you with your animated project, from script, story boards to finale completion, we would be happy to hear from you contact us,
GrisDismation@gmail.com 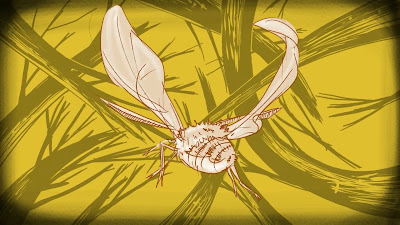 A frame from a short animation about a foolish moth. "Foolish Moth" animation by Dismas, is an entry for the FlipaClip app., Tell Her I Love Her Band new music Unravel MusicVideo AnimationContest
The youtube link to the animation, https://youtu.be/qId2YsHTSMc
This animation was animated at 12 frames per second and drawn in the frame by frame animation technique.

I am an artist, animator, and author, who enjoys the illusion of making art move, animation. I enjoy to animate digitally in the traditional style, frame by frame. Frame by frame means that every movement is shown by redrawing each frame then are shown in sequence to give the appearance of movement. There are other animation techniques like sand animation, stopmotion animation, puppet animation and many more. An example of 2D puppet animation, is where the character is drawn in 2D and rigged with digital bones to be manipulated like a puppet, then every frame is keyed in sequence to show movement. To me, there is a wonderous enjoyment in the tedium of drawing the same thing over and over and over with tiny adjustments to the drawing and 24 drawings later you have one second. I love it.

If you enjoy hand drawn, original animation, We invite you to our youtube channel for more, and be sure to subscribe to stay updated on the latest animation, https://www.youtube.com/user/GrisDismation

Posted by GrisDismation at 12:33 PM No comments:

Welcome to GrisDismation Art and Animation Blog and thank you for stopping by.

Here you will find GrisDismation Art, Animations, random tips and things that come to mind. Feel free to check things out, leave a comment or two and share us with your family, friends, and enemies.
Have a great day or night or what ever time it is in your part of the world.